skip to main | skip to sidebar

For up-to-date information and comments from Councillor Ted Tynan please visit his new website at https://tedtynan.wordpress.com/

Tynan slams Budget which benefits the better off once again

Workers’ Party Councillor Ted Tynan has described this week’s budget as a con trick which claims to have given a little to everyone when in fact it has overwhelmingly benefitted the better off.

Cllr. Tynan said that the government had thrown crumbs at workers and the least well off with one eye on the election but when examined more closely it leaves the working class still in a worse position than they were a decade ago.

“There has been a lot of noise made about the 75% Christmas Bonus this year and the €2.50 increase in the fuel allowance but these bring cold comfort to families facing into another winter.  The fuel allowance increase will barely buy a bag of kindling with which to light a fire, let a one keep it going for a day.”, said Cllr. Tynan.

For all the talk of fairness this government was able to find €750 million to cut tax for large corporations instead of putting the money into vital services like health and education.   Relying on NAMA and the same speculators who caused the economy to go bust is no solution to the housing crisis and it is notable than 90% of the promised new homes will be in the Greater Dublin area.  Barely a handful of additional social housing units will be built by this government which is a shocking indictment of Fine Gael and the Labour Party”

“Where is the cancellation of the hospital bed charges introduced over the last few years or in the prescription charges?  For all the talk of job creation this government is once again throwing money at corporations who are more interested in creating profit for themselves than creating jobs.” said Cllr. Tynan

The Workers Party councillor said that the budget was a wolf dressed in sheep’s clothing when it came to fairness. “This budget will merely maintain and indeed widen the gap between rich and poor in this country.  A few crumbs for working class people will not decrease the anger of people at the policies of this government and its Fianna Fáil / Green predecessors who have impoverished families the length and breadth of the country  and who see no light at the end of the tunnel in this budget.”, said Cllr. Tynan.
Posted by Ted Tynan, Workers Party at 10:45

Cork Workers’ Party Councillor Ted Tynan has said that the proposed merger of Cork City and County Councils would be a disaster for the city and would not be positive for the county either.

Cllr. Tynan said that proposed merger made no sense from either a social, urban development, or good governance perspective.  He said the proposal amounted to nothing less than the extinguishment of Cork’s 1,000 year old existence as a city.

The Workers Party councillor said that the government had predetermined the agenda and that the statutory committee which had made the proposal was acting to that agenda.  “The fact that two of the five members dissented from the agenda shows how preposterous this proposal is.  It is purely based on saving money, not on common sense or the efficient delivery of local government services. The proposal will merely make local administration more remote and inaccessible to citizens”, said Cllr. Tynan.

“If merging two already large councils like Cork City and County Councils  made any sense then the inevitable outcome of this policy would be to end up with about six councils in the entire country – these would be six of the most unwieldy and unworkable councils ever created”, he said

Cllr. Tynan said that the proposal was not a merger but a takeover of Cork City by the larger County Council.  It would result in a dilution of democratic accountability and unworkable local electoral areas.  “In short this plan would be a disaster for the city and a disaster for the county.”

The Workers Party councillor has welcomed the comments of Lord Mayor Cllr. Chris O’Leary but has said that the opposition to the proposed merger must be widened out to the general public and all stakeholders in society.  “This is not just the merger of two councils, it is the abolition of our city, a city with a thousand year long tradition. If there was ever a reason for the city to earn the name Rebel Cork it is now.  The people of Cork City should stand united and say to Alan Kelly, the government and the three majority authors of this report HANDS OFF OUR CITY”
Posted by Ted Tynan, Workers Party at 20:14 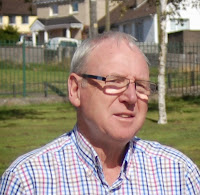 Cork Workers’ Party councillor Ted Tynan has said that a massive turnout of protesters for the Right 2 Water demonstration in Dublin on August 29th would be the best response people could give to the DPPs decision to prosecute more than 20 activists in relation to last November’s Jobstown protest.

Cllr. Tynan said that the decision to prosecute the protesters, including 3 elected representatives, on extremely serious charges was nothing less than a politically inspired assault on the anti water charges movement as a whole.

The Workers’ Party city councillor said the best answer opponents of the water charges could give to this government offensive would be to put tens of thousands of feet on the streets of Dublin on 29th August in a clear message of defiance.

“This campaign is not going to be cowed by the victimisation of individual protesters, it will only get stronger but it needs to show its strength with a massive turnout for the demonstration on the 29th and continued resistance on the ground” said Cllr. Tynan.

Workers’ Party Councillor Ted Tynan has said comments he made in an interview with the Cork News in relation to the party’s position in support of the non-payment of water charges had been taken out of context. 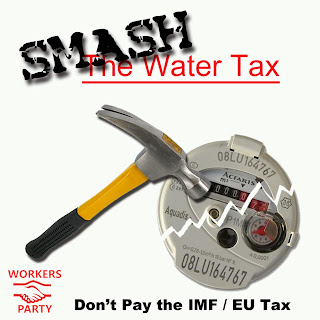 Cllr. Tynan said the Workers’ Party was very clear in its total opposition to water charges and its call for a mass non-payment campaign.

He said: “I was making the point that while non-payment is central to defeating the water charges and Irish Water it is only one element in the fight against these charges and the privatisation of a vital natural resource.  This battle cannot be reduced to simple sloganising.”

“In addition to non-payment , the Workers Party supports communities in their fight against the installation of water meters. We also believe there is a need for a vigorous campaign against the privatisation of this vital resource and we endorse the position of the United Nations that the right to safe and clean drinking water and sanitation is a human right that is essential for the full enjoyment of life and all human rights.”

“The Workers Party believes that Irish Water must be abolished along with the water charges and the responsibility for public water and sanitation should revert to the local authorities which must be properly funded from a progressive and fair taxation system”, said Cllr. Tynan.
Posted by Ted Tynan, Workers Party at 20:32

Link to other websites

Ted Tynan, Workers Party
Cork, Ireland
Councillor Ted Tynan is one of the best known local community activists and campaigners in the North East area of Cork City. He has been deeply involved in countless local campaigns for the rights of ordinary people and, as a socialist, he believes that workers and their families must come before private profit. Ted has been active on a large number of local issues in Mayfield and the wider North East ward area and is a former Chairman of Mayfield East Community Association. If you have any issues you would like to discuss with Cllr. Tynan or need assistance in areas such as housing, maintenance, social welfare, etc or have concerns about any local issue please contact Ted Tynan at (086) 190 8281 (mobile) or e-mail him: tedtynan@gmail.com 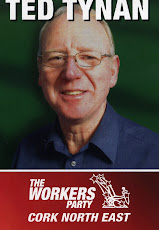